I had a decision to make…I could hike the six miles up to Maroon Lake or take the “Photography Tour” offered by T-Lazy-7 Ranch. I had been to Maroon Lake one time before. It was early fall and the leaves were just beginning to turn. It is a gorgeous place. Truly God’s country. 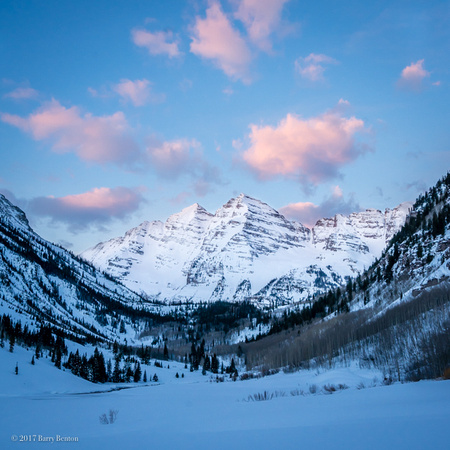 The Maroon Bells just before the sun found them.

I’ve seen photos of the Maroon Bells in winter and wanted a chance to grab that iconic (if not over-photographed) scene for myself. After some research, it was clear that T-Lazy-7 Ranch snowmobile tours offered me the easiest way to get there during this time of year. The National Park Service does not keep the road open during the winter so you can hike, bike, cross-country ski or snowmobile up the 12-mile round trip. I opted for the snowmobile tour. T-Lazy-7 positioned this early (6:00 AM) tour as a “photography tour.” It was not a pure photography tour. I’ll explain more later.

I departed Plano, TX around 1:00 PM on Thursday and drove around 13 hours to get near Aspen, CO. At that point, I realized that I was a bit tired and should rest before finishing the trip. There are several rest areas on I-70 west of the Eisenhower tunnel and I pulled into one and took a quick one hour power nap. It was difficult to wake up. But, I did and wandered the final hour into Aspen and up to T-Lazy-7 Ranch’s office near the Maroon Bells welcome center.

The first thing that struck me about Maggie, Red and Dagwood (probably not his real name) is how friendly and upbeat they were at 5:45 AM. After filling out some paperwork and paying the fee we were outfitted with warm boots and a helmet (wear plenty of layers and a heavy jacket…dress for extremely cold weather) and given a brief overview of how to operate a snowmobile (very easy, heated seats and handlebars…it’s a pretty nice ride). 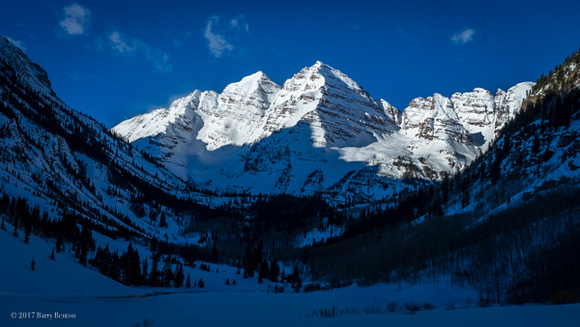 We arrived just before the sun hit the top of the Bells and watched the pinkish mountains begin coming to life with sunlight. Now, back to this “Photography Tour” thing. In my opinion, a “photography tour” would last until the Bells were completely lit by sunlight. We could stay only until they were about half lit. This was very disappointing. I’m sure they had other tours lined up for the rest of the day and couldn’t tie up assets for another hour but they really should call this a “Sunrise Tour” or “Watch the Sun Light Half the Maroon Bells Tour.” On the plus side, we were served hot chocolate while were standing shin deep in snow.

In summary, I would highly recommend a snowmobile tour with T-Lazy-7 Ranch. The people were super nice, the snowmobiles were easy to operate and seemed to be in good shape and it was a lot of fun driving one. Just don’t go expecting to have a lot of time down at the lake. If your goal is to photograph the Maroon Bells in full sunlight I would recommend hiking or finding a mountain bike to rent (or cross-country ski if that’s your thing. It’s not mine. Been there, done that and it almost killed me. Much respect for cross-country skiers.) It’s also possible that the later morning tours would be fine for those wanting to stop briefly at the Maroon Bells before going along for the rest of the tour. I’ll be back to Maroon Bells again…maybe next time I’ll hike.

This activity earns 3 out of 4 Cameras: 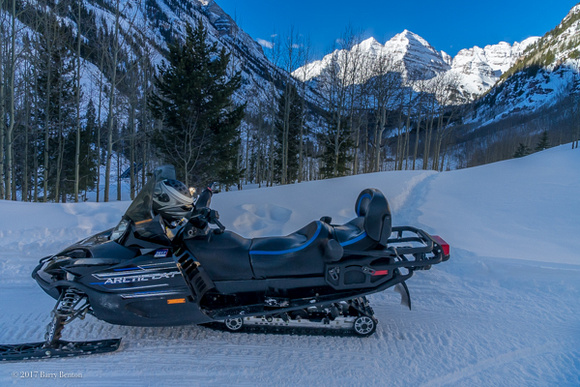 My trusty steed quietly awaiting orders from his master.